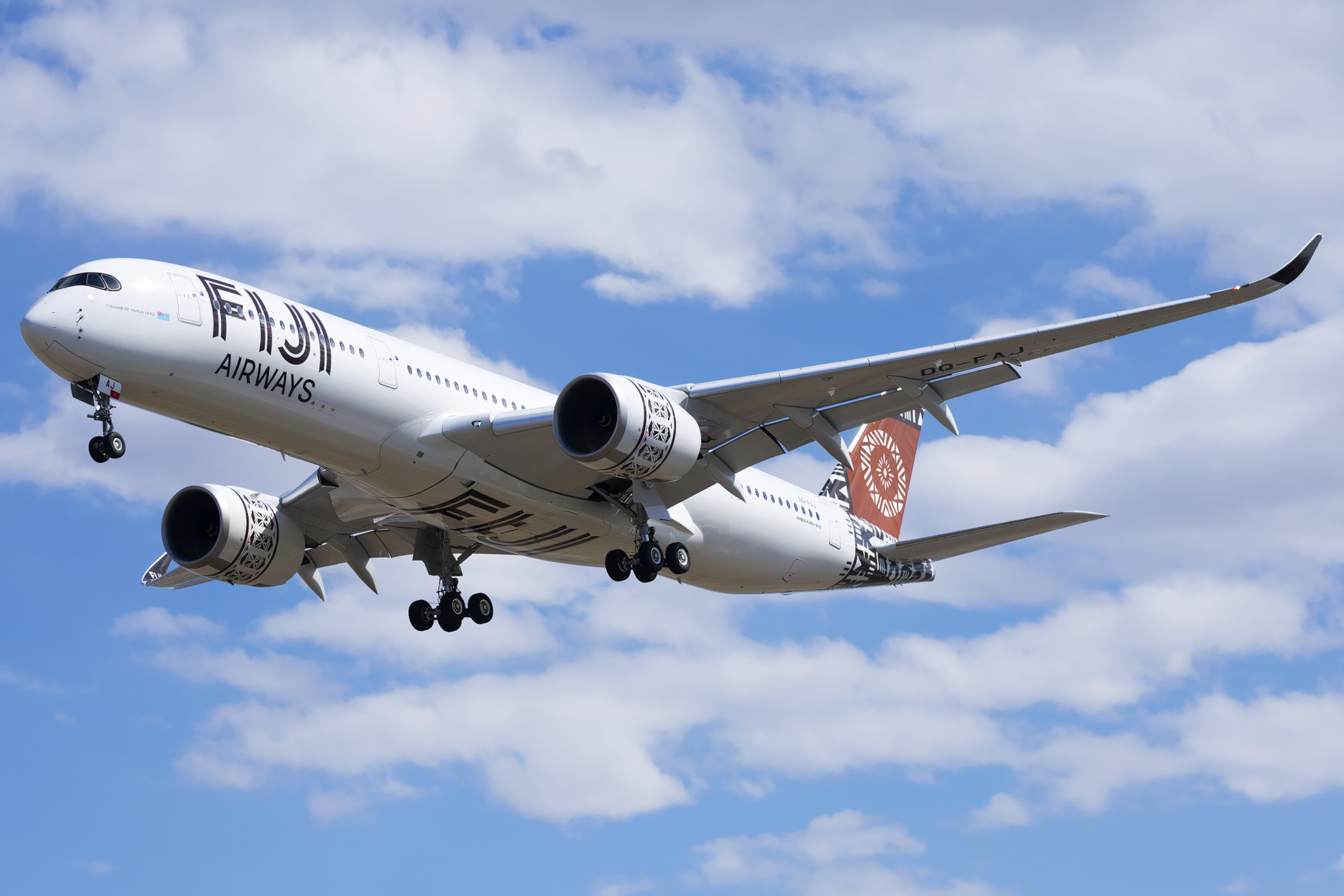 In December of 2019, I flew from San Francisco, California (SFO) to Nadi, Fiji (NAN) on Fiji Airways's beautiful A330-200 (flight FJ871) for winter holiday. The experience was overall wonderful, from the true Fijian hospitality the crew displayed, to the surprisingly flavorful food.

At San Francisco International, all passengers are treated to a beautiful view of the festively decorated international terminal during the various holidays. This time, the terminal was decked out in multicolored wreaths and Christmas colors.

Fiji Airways uses only 3 windows at Aisle 12 in the Departures Hall for check-in, which seemed to be sufficient, despite the flight being full (it was probably sufficient simply because we only arrived at the airport around 20 minutes prior to scheduled boarding time). Check-in was a very smooth experience.

Our flight, which was scheduled to depart at 9PM, was on time - Fiji Airways's departures from SFO are normally always on time, since their A330 spends about ten hours parked at a remote stand after its arrival from Nadi.

Security was a fast experience, and the line was shorter than usual despite the Christmas traffic. Fiji Airways departs from the A Gates at the International Terminal, and as such, we headed for the security checkpoint that separated the Departures Hall from the concourse that led to the A Gates. Once that was through, we headed straight to Gate A5, as there wasn't much time to spare before boarding.

Upon entering the aircraft, the atmosphere was very calm, accented by Fiji Airways's beautifully designed seat upholstery. The color palette in economy class was a mix of soothing browns and blacks, with bold red and white pillows to accent these tones. Fiji Airways certainly had their style on point.

Economy-class passengers are provided with a thin (but standard) blanket, a plump pillow, and a pair of flimsy and poor-quality branded headphones. IFE screens are 10.6 inches wide and seemed to be crisp in quality. I was sitting in seat 19K (window).

As a six-foot-tall person, the legroom was not great. For a 4-hour hop to Australia from Fiji, it would've been fine, however, on an 11-hour trek from Fiji to LAX or SFO, it was definitely not adequate. This was really my only complaint about the flight.

We pushed back after a slight twenty minute delay due to paperwork issues. The cabin was slightly hot, though not unbearably so.

The mood lighting added a nice touch to the service.

Immediately upon climb, I started watching Moana on the IFE. Funnily enough, this was the third time I had watched Moana when flying to an island destination - I had watched it previously on United flights to Kahului and Papeete.

About 45 minutes after taking off, the attentive flight attendants started a drinks and meal service. I opted for a cup of - you guessed it - Fiji water, of course.

Not long after the drinks service came the food, which was served efficiently. I ordered the chicken and mashed potatoes option, which was surprisingly very flavorful. It was served with a fun-sized Twix bar, crackers, cheese, and an empty plastic cup. I'm not sure what the cup was for. Honestly, I really liked the food because it was so flavorful - the mashed potatoes had adequate salt, the meat was very juicy and gravy-soaked; my only suggestion on this aspect of the service would be to slightly increase the portion served (admittedly, I don't get full very easily).

The vegetarian option was Tortellini with Marinara; I tried this from my sister and while it tasted pretty good, it was definitely slightly smaller in quantity and lacking the flavor that the chicken had.

After finishing the meal, I watched a good 2 hours more of movies & TV, but Fiji Airways doesn't have that big of an offering for English audiences.

Then, I attempted to sleep, which was a little bit hard considering the width of the seats seemed on the smaller side, but eventually settled with my head against the window.

After waking up about around an hour out from Nadi, we were served breakfast. I was grateful to have been served twice on this flight (it was about 11 hours). This was an experience that was completely different than Icelandair, which had only food available for purchase on an 8.5 hour flight from SFO to KEF (we ended up purchasing a tiny, 4-slice pizza for $10 on that flight).

Anyway, I chose the blueberry french toast for breakfast. It certainly looked very appetizing. It tasted alright - it had enough flavor, but the flavor was just a little… off; maybe a bit too sweet and sugary. I really did appreciate the blueberry muffin and the ice-cold fruit cubes served with it, though. Those tasted great, and the fruit was very refreshing, considering the cabin was on the hot side and I was dehydrated.

Of course, I ended up trying the other option from my sister (thanks sis). This was a scrambled egg with marinara served with a sausage and a hash brown. As well as looking good, this option also tasted really good (the photo doesn't do it justice).

Props to Fiji Airways for serving some solid food. The flight attendant even had a few extra muffins and decided to give them to us. This really showed the attentiveness of the cabin crew.

At the very end of the flight, I also realized that Fiji Airways sold model 737s and A330s duty-free.

We lined up for the airport and landed in Nadi at around 5:45 am, just as the sun began to come over the mountains. Since part of the airport was open-air, I was able to get a nice view of our A330.

After going through customs and exiting the airport, the sunrise was in full swing. I went right up to the airport fence and snapped some pictures of one of FJ's new shiny A350s that had only been delivered 2 weeks before.

This concludes my trip report of Fiji Airways' A330.  My only constructive critisicm for Fiji Airways would be to slightly increase the meal sizes and cool the cabin a bit more (maybe also proactively offer water during the flight). Of course, the seat was slightly thin and my legs did constantly bump into the seat pocket in front of me, but seat legroom is a choice the airline has made that is not easy to fix. Overall, however, the entire experience was decent - but next time, I might opt to flying down to Sydney and then taking a United 777 in economy class back up to SFO. See you on another future trip report!

Service: 9/10 (very friendly, but could've proactively offered water during the flight as I know some airlines do)

Soft Product: 4/5 (Adequate, nothing much extra. It was nice that they offered headsets, albeit poor-quality ones.)

TRIP REPORTS Fiji Airways A330-200 A330 NAN SFO Airbus Nadi San Francisco A332 Fiji Trip Report
Our Weekly Digest Straight to Your Inbox Subscribe to receive our weekly aviation newsletter to stay updated on industry news. No spam, no BS. Unsubscribe at any time.