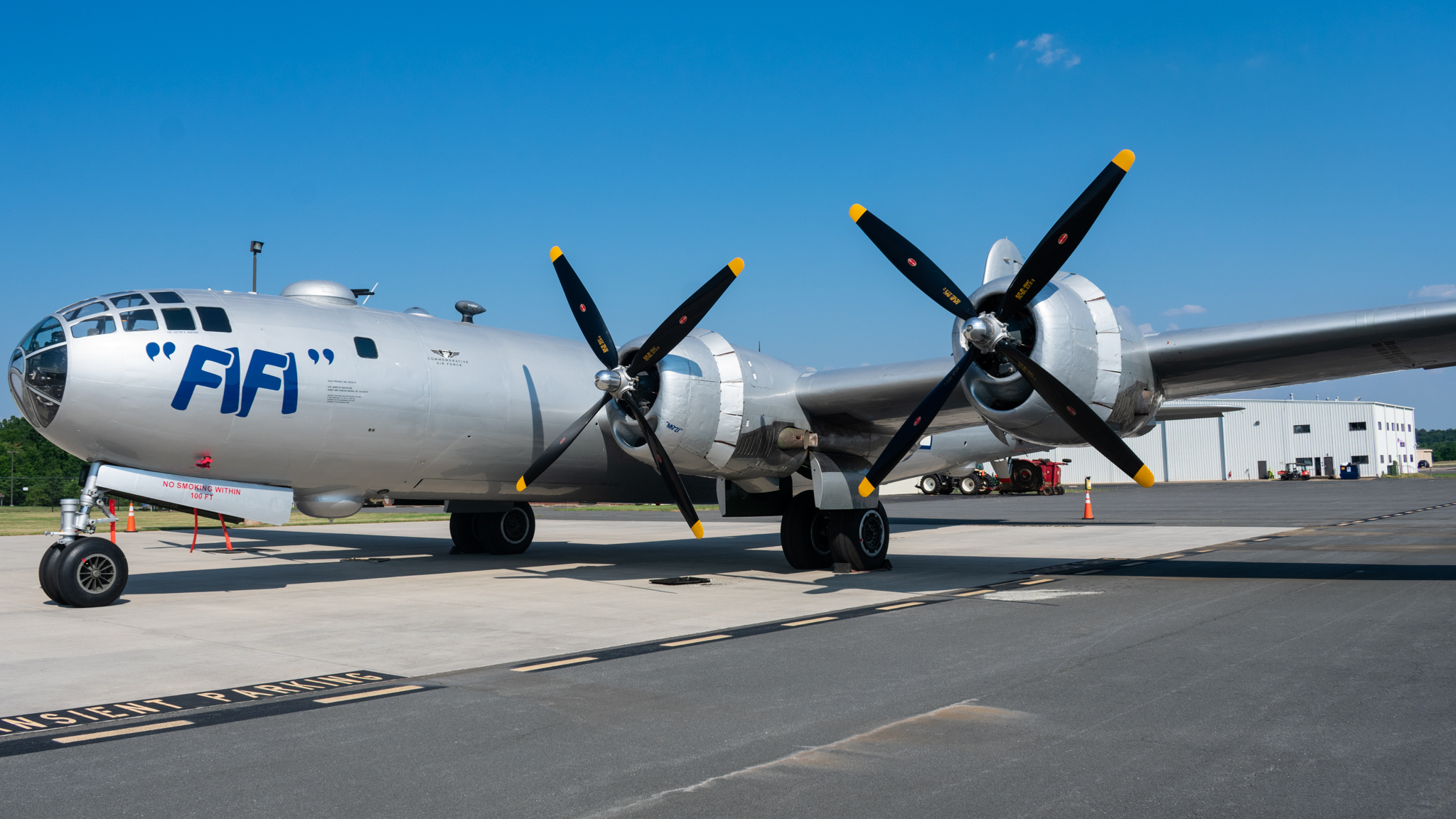 Inside Preparations for the WW2 Flyover

Inside Preparations for the WW2 Flyover

Editor Note - The Arsenal of Democracy Flyover is officially canceled.

WASHINGTON - On a cloudy Thursday morning, media and press gathered at an undisclosed airport near Washington D.C. The occasion? To cover preparations taking place for the Arsenal of Democracy: 75th Anniversary of World War II Flyover the National Mall. Originally scheduled to take place on Friday, September 25th at 11:30 am, the event was postponed to Saturday in hopes of better weather.  However, the flyover has now been canceled due to low visibility conditions on Saturday.  Unfortunately, the Arsenal of Democracy flyover does not have the necessary permits to fly into the Nation's Capital after Saturday causing the cancelation of the event.  The Explorer Blog hoped to cover this incredible event Saturday and will share an exclusive look into what it takes to set up this flyover.

The Explorer Blog, along with other media, press, and independent freelance photographers were given the opportunity to get on-ramp and cover warbirds taking off. These aircraft included a Consolidated PB4Y-2 Privateer, Boeing B-17 Flying Fortress, and two Boeing B-29 Superfortresses, but this list does not include all the warbirds participating in this flyover. Other aircraft from multiple varieties will also be participating: from the British Spitfires to American Warhawks, and to Navy Avenger Bombers to Corsair Fighters, this flyover will include one of the biggest display of warbirds.

After the final B-29 took off from the runway, the media and press were escorted and shuttled to the Chantilly Air hangar for a press conference with the event organizers and special guests. The press conference, hosting the "WWII Hero Panel" started with an introduction by Pete Bunce, President and CEO of the General Aviation Manufacturers Association (GAMA), and by the President of the Commemorative Air Force (CAF), Hank Coates. The panel moderator, Matt Jolley then asked a couple questions to each of the three "WWII Heros", and later took some questions from the press pool.

The first WWII Hero introduced was Sergeant Paul Hillard of the USMC. During the conference, he recounted his story serving as a radioman and gunner in an SBD Dauntless dive bomber in the Pacific Theater. Now, Mr. Hillard currently serves as the chairman of the National World War II Museum board.

The next hero introduced was Connie Palacioz. At age 18, she worked at Boeing in Wichita, Kansas, as a riveter on the B-29 Superfortress production during WWII. Among the B-29's Mrs. Palacioz worked on, one still survives and still contains the original rivets she placed years ago.

The last hero was Lieutenant Colonel Robert Vaucher of the USAF. Lt. Col. Baucher flew 117 combat patrol, bombing, mining, and photography missions during WWII and led the largest assembly of a B-29 flyover on a single target during the war. He also served as Mission Commander and lead the American "Show of Force Flyover" with 525 B-29 Superfortresses flying over the Japanese surrender ceremony aboard the USS Missouri on September 2, 1945, in Tokyo Bay.

During the flyover, each of the three WWII heroes interviewed at the press conference will be on board the warbirds flying over the nation's capital. After the press conference finished, the media and press were able to get on-ramp and interview the WWII veterans, aircraft flight crew, and get hands-on with the warbirds before their flight for the flyover. The Explorer Blog was able to cover both B-29s, and specifically for "Doc", I was fortunate to go inside the aircraft and see the cockpit as well as the inside of the fuselage.

An interesting fact one of the crew members mentioned while inside the historic bomber is that the B-29's cockpit became the basis for the Millenium Flacon's cockpit, a spacecraft piloted by the fictional character Han Solo in the movie franchise Star Wars. After exiting out of the aircraft, media was gathered for a photo-shoot with Mrs. Palacioz and "Doc".

This specific Superfortress, nicknamed "Doc" is the most recent B-29 to be restored. Along with her counterpart "FiFi", these are the world's two sole flying B-29s. Each aircraft has its own extraordinary history and are maintained by a dedicated flight crew ready to preserve our country's history and share it's legacy to future generations. For more information on each of the B-29s, please check out their organization and websites:

Thank you to the Arsenal of Democracy for hosting us along with other media and press organizations covering the preparations of and the flyover. Thank you to the event organizers: General Aviation Manufacturers Association (GAMA), National Air Traffic Controllers Association (NATC), International Council of Air Shows (ICAS), and the Commemorative Air Force (CAF). An extra thanks to Chantilly Air for hosting the press conference in one of their hangars and we absolutely wish for a successful and safe flyover next time they fly!

INFORMATIONAL Warbirds WW2 Flyover Washington DC CAF GAMA ICAS B-29 Superfortress WWII
Our Weekly Digest Straight to Your Inbox Subscribe to receive our weekly aviation newsletter to stay updated on industry news. No spam, no BS. Unsubscribe at any time.